At long last our weather has broken with several days of westerly winds and a couple of weak fronts which- as predicted- have brought the wildlife back within sight of land! More reassuring- but harder to explain-  has been the return to St Clements of our local Grey Seals – though “Sammy”/”Silverback” was not on his usual “sofa” (low rock) today we saw 3 females, 3 of last years pups and a young bull, and even “Nervous Nigel” (a young male) was on the Greeb  where he spent most of last summer! Seabirds have been inshore in good numbers though the weather meant we had to watch from headlands; Wilson’s Petrels off Porthgwarra and Black Head, Storm Petrels, Cory’s and Sooty Shearwaters, Skuas and good numbers of Manx Shearwaters and Puffins- the last 2 making it into the bay with 1,400 and 9 respectively passing Mousehole on Sunday evening. Today’s highlights included Sandwich Terns, a few Manx, the seals mentioned above, and, best of all 10-12 Risso’s Dolphins feeding off Penlee. These dolphins have highly variable pale scarring which makes many individuals easily identifiable so it was nice to see that at least 3 (females?) were animals we have seen in the last 2 years and which calved in the area in 2016. In fact all of the dolphins today appeared to be presumed females with 1-2 year old young!

Want to join the discussion?
Feel free to contribute! 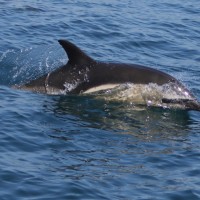 1st Pelagic of the season
Scroll to top